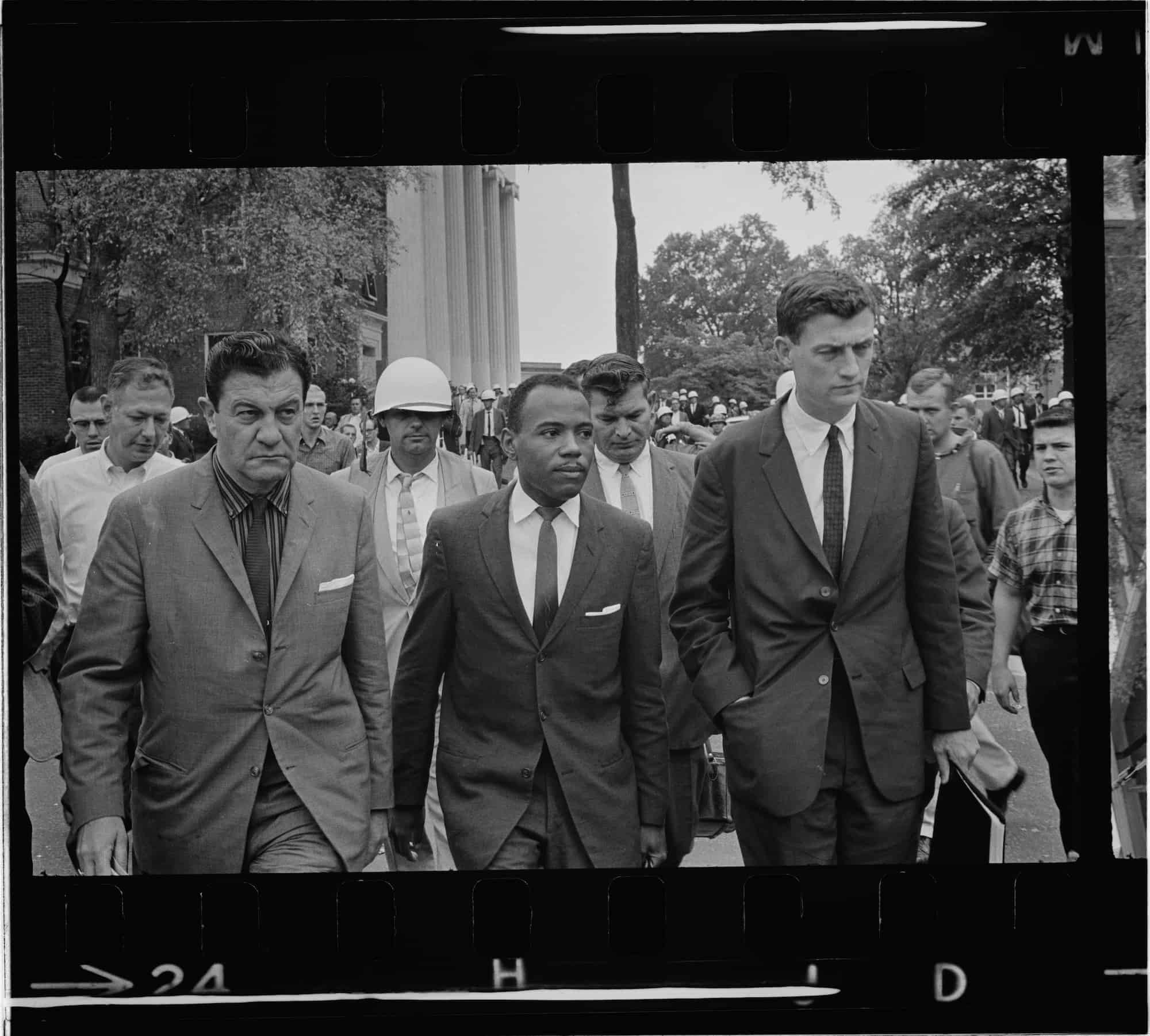 James Meredith and The March Against Fear

You are here: Home / Archive / Feature Stories / James Meredith and The March Against Fear

In 1966, Civil Rights pioneer James Meredith set out on The March Against Fear, a walk to prove black citizens no longer needed to fear white people. Soon after beginning, he was ambushed and shot. The march was continued by Dr. Martin Luther King Jr., Stokely Carmichael, and countless others. Weeks later, Meredith had recovered and rejoined the walk, giving history an enduring image of persistence and determination. We talk to historian Ann Bausum about the history and impact of the march.

Marty Peterson: Black history month is upon us. It’s a time when schoolchildren and adults across the country are re-visiting those civil rights stories that are so foundational to America. Dr. Martin Luther King Jr’s “I have a dream” speech, Jackie Robinson breaking baseball’s color barrier, and of course, Rosa Parks bravely refusing to give up her seat. But what about some of the forgotten figures who have also shaped our country’s past? Take, for instance, James Meredith’s 1966 March Against Fear…

Ann Bausum: James Meredith, who made a reputation for himself four years earlier by integrating ‘Ole Miss’ announced that he was going to walk from Memphis to Jackson, Mississippi through his home state of Mississippi. And he was doing this he said because he was tired of being afraid of white people and he wanted to show that you didn’t need to have that fear anymore. That history had moved on.

Peterson: That’s Ann Bausum, author of the book “The March Against Fear: The Last Great Walk of the Civil Rights Movement and the Emergence of Black Power.” She says the march, intended to show that black people didn’t need to be afraid anymore, took on a more ominous meaning almost immediately.

Bausum: He started this walk June 5th and on June 6th the first day after he’d crossed into Mississippi he was ambushed and shot by a white man. He didn’t die, but he was injured enough so that he couldn’t continue. As was the tradition in that era the Civil Rights movement coalesced to show that an act of violence would not go unanswered and to complete his walk.

Peterson: The other civil rights leaders who took up the walk for Meredith included Dr. Martin Luther King Jr. and Stokely Carmichael. Their presence brought a lot of attention… and additional marchers. As the march grew, the risk involved grew with it.

Bausum: There was that underlying concern that there might be further violence, attacks leveled at the marchers. The Mississippi state authorities, law enforcement authorities were tasked with trying to keep the marchers safe, and because there was a large contingent of news media witnessing the whole thing, and because negative publicity was bad for the state, you know reluctantly or not, this essentially all-white force still did try to provide some safety. But that patience began to wear thin and near the end of the march in Canton, Mississippi, the state troopers from Mississippi actually tear-gassed and began beating a group of protesters who are standing their ground on a public school ground demanding the right to camp there as citizens trying to use public property.

Peterson: After fighting through resistance like this, the marchers eventually drew close to their endpoint in Jackson, Mississippi. It was then, at the very end, that Meredith was able to rejoin the march he had started.

Bausum: He returned to New York State, which was where he had been living at the time for most of the march, and it’s only in the final days that he comes back to Mississippi. He’s well enough to walk again, and not just walk but hike. So he is there for the finale as this ever-growing crowd of 15,000 people reaches his destination on the 26th of June in 1966. He has a featured speaking part there.

Peterson: Once the march was over, organizers had hopes that it would become a catalyst for great change… something that ultimately never occurred.

Bausum: It fell far short of its mission. And that was an impediment to launching future marches. There had been hopes that after this march there would be more legislation, just like the voting rights act had followed the previous year's march from Selma to Montgomery. And that didn’t materialize. So the march was expensive, it failed to raise all the funds that were required. So the SCLC Martin Luther King’s organization had to bail it out of debt. And then the tensions that began to develop between the various civil rights organizations made it less likely to even attempt something like this again.

Peterson: Though its goals were left incomplete, Bausum says its historic reach cannot be denied. First, it was one of the final events to unite Dr. King and his more radical counterpart, Stokely Carmichael.

Bausum: Stokely Carmichael was a young man when he joined the Civil Rights movement in the early ‘60s and became a Freedom Rider and so forth. By 1966 he was frustrated with the slow pace of change. Martin Luther King was just enough older to perhaps have more patience, and his personality lent itself to that as well. But their differences were to some extent, they were a good point-counterpoint to one another. Martin Luther King was cooler, Carmichael was fiery. They enjoyed one another – there was not animosity between them. They helped, between the two of them to cover a broader base in the movement than either one of them might have been able to cover alone.

Peterson: Bausum says the march is also remembered for being where Carmichael coined the term “Black Power,” which became a rallying cry for the civil rights movement.

Bausum: During the march Stokely Carmichael partway through debuted the Black Power phrase on the national stage. So the emergence of Black Power on its most basic level is the emergence of this phrase and this concept that took on different meanings depending on who was listening to it. So the idea of having power might have sounded really good if you were in Mississippi and you spent your whole life living in a county where African Americans were the majority population but had never once held an elected office. If you were in a different part of the country and you’re not interested in sharing your power at all, then Black Power may not sound like a good idea to you in any situation. And so this concept and this term began to take on different meanings around the country and fed into the Black Panther movement. That Black Power phrase caught the nation’s attention in ways that affected the Civil Rights movement going forward that began to make it harder for the various organizations in the Civil Rights movement to speak with one voice as frustrations mounted over the slow pace of social change, and people began calling for greater action.

Peterson: And Bausum says that call for greater action continues to inspire protesters to this day.

Bausum: The march against fear as I said did not end with this great uplift that people had hoped for. It exposed these wounds from the legacy of slavery that the nation just wasn’t ready to face. It chose to push a lot of these issues out of sight, hoping they would go away. We’ve learned over time that that doesn’t work. So issues that were left unresolved have come forward again. The Black Lives Matter movement is a continuing legacy from that early Black Power cry in 1966. I suspect this new movement will persevere or be followed by others until that unfinished legacy of slavery and the toll it’s taken on the nation is truly faced.

Peterson: That unceasing call for equality is something that James Meredith, the man who began to march to end fear, has continued fighting for his whole life.

Bausum: He went back in 1967 to complete the part of the walk that he had missed. He said to me when I met with him that he did that because he needed to prove to himself that he wasn’t afraid. And he repeated the entire walk again on various anniversaries, or parts of it and undertaken other walks. So he continues to try to influence people with his feet.

Peterson: And, finally, the march is remembered because of its scale.

Bausum: The year before the march from Selma to Montgomery in Alabama had lasted five days. This one lasted 22. That one covered 54 miles, this one with a detour added was over 300. So just the logistical scale of it makes it remarkable.

Peterson: As with any event that large, the March Against Fear made a big impact on all of those who witnessed it… a group that includes Bausum herself.

Bausum: As a child, I actually witnessed a small part of the march. That memory was not fully connected up with history, but in my adulthood, I was able to link those up.

Peterson: She says she now hopes her book can resonate in the minds of a new generation of thinkers and hopefully can stay with them… and their parents… as it stuck with her.

Bausum: I feel very strongly that we need honest history that is willing to look even at the tough stuff and show that fights can be difficult so that when young people go out into the world they are ready for that, they haven’t been fed a candy-coated version of how the world works. But I also like to write about under-told stories and I write them in such a way that they are understandable for younger readers, but are engaging for all readers. So a lot of adults enjoy reading my books in part because they learn things that they haven’t been taught anywhere else. I think this book more than most even is one of those truly untold stories and one that bears to be relearned or learned again.

Peterson: To read more about the March Against Fear, you can find Ann Bausam’s book in stores and online. For more information on all of our guests, visit our site, viewpoints online dot net. You can find us on Twitter @viewpointsradio. Our show is written and produced by Even Rook and Pat Reuter, our executive producer is Reed Pence, our production director is Sean Waldron. I’m Marty Peterson.

Enter your name and email address below and I'll send you periodic updates about the podcast.

Culture Crash: The Impact of “Hamilton: An American Musical”

The Wonders of Cave Diving

A History of Fabric

Henry Clay: The great American statesman you should know more about (2016)

Empowering Your Community to Create Change (2017)

A Triumph of Genius Edwin Land and Polaroid